The 4th Annual Conference on Trafficking in Persons is to be held in Benin City, Nigeria, on Thursday 13th July, by Edo Women’s Development Initiative (EWDI).
This year the focus is Modern-Day Slavery: Policies and Programmes to Combat/End Trafficking in Edo State.
For the fourth year in a row, the all-female group -some of which EWDI’s founders- puts the trafficking issue, mainly involving women and young women from Edo State trafficked to be sexually exploited in Europe, under the international spotlight.

The roots of the problem are various: political instability in Nigeria and in the neighbouring countries; growing poverty in the countries of origin and smugglers in Italy; unchanged sex demand despite economic crisis in Europe.
Underage girls victims of trafficking sold by their families have grown in number over recent years.

Therefore, we need to analyse the problem through its political, economical, social and cultural implications.
This is the reason why EWDI intends to actively involve civil society, public entities and religious bodies in order to allocate resources to arrest the trafficking and selling of women mainly from Edo State.
EWDI is engaged in this effort since 2014.
This year Esohe Aghatise, Director of Iroko, will give a keynote address. A UN Expert on Trafficking in persons and Board Member of Coalition Against Trafficking in Women, she was honoured in 2007 by the US State Department as a hero in the fight against Modern-Day Slavery; in 2008 by the Nigerian National Agency for the Prohibition of Traffic in Persons (NAPTIP) for her work against trafficking and awarded in 2014 by the European Institute for Gender Equality (EIGE) as one of the women and men inspiring Europe in Gender Equality.

Finally, it is encouraging to know that one of EWDI trustees, Professor Yinka Omorogbe, is the new Commissioner for Justice and Attorney General at Edo State. 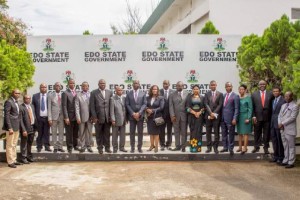