Abolitionism is the belief that prostitution is fundamentally exploitative and violent and is incompatible, in any form, with gender equality. Therefore all efforts must be made to abolish this practice. This belief is not founded on morality or judgements of sex or sexuality, but on the grounds of human rights and human dignity. Although prostitution does not only involve men buying women for sexual acts, the vast majority of prostituted people are women and the vast majority of buyers are men, and this page makes reference largely to women as victims of prostitution. Prostitution of any person is similarly harmful and unacceptable.

The word abolition has been used for centuries with reference to slavery and, more recently, in this context with reference to prostitution. The links between the two are well-explained by Melissa Farley, psychologist and founder of ​Prostitution Research and Education​:

“According to many research studies […] slavery and pimp-controlled prostitution are the same experience ​from the perspective of the enslaved or prostituted.​ The abuses of power in prostitution and the abuses of power in slavery […] are profound social injustices resulting in great harm. The same arguments that justified the abolition of slavery also justify the abolition of prostitution. Pimps and traffickers are traders who own and enslave human beings. Sex buyers purchase these people, exploiting and abusing them.”[1]

Coercion and Poverty
For the vast majority of women, prostitution is not a conscious and calculated choice. Most women who get involved in prostitution do so as a result of various forms of coercion, including by conditions of poverty and need, by the exploitation of conditions of vulnerability by pimps or others in positions of power or by human trafficking. When it is a so-called ‘independent decision’, it is generally the result of extreme poverty and lack of opportunity, or of underlying vulnerability, such as past trauma (e.g. child sexual abuse).

Women from the lowest socioeconomic classes—impoverished women, women with a low level of education, women from the most disadvantaged racial and ethnic minorities—are overrepresented in prostitution all over the world. These are systemic societal problems that need to be addressed, rather than simply accepting prostitution as a viable option for these women.

In prostitution, women have sex with men they would never otherwise have sex with. The money thus acts as a form of force, not as a measure of consent. It acts like physical force does in rape.

Male Dominance over Women
The acceptance of prostitution and its branding as ‘sex work’ cannot be conflated with sexual liberation, which is an important part of the fight for gender equality.

Sexual liberation for women cannot be achieved as long as we normalise unequal sexual practices where a man dominates a woman and men’s access to sex is seen as a right.

In prostitution the buyer has sex with a woman who does not enjoy it and who may be making a tremendous psychological effort to mentally dissociate herself from the buyer and the sex act. This is not a mutual and equal sex act as it puts the woman in a subordinate position, reducing her to a mere instrument of sexual pleasure for the buyer. There is a clear power imbalance between the buyer and the prostituted woman. As such, it has similarities to rape because it is a form of sexuality that is entirely controlled by the man (the buyer, as opposed to the rapist), disregarding the desires, physical well-being or emotional pain of the victim. The only difference in prostitution is that this interaction is then financially ‘compensated’.

Prostitution is not only harmful to individual prostituted women, but also to society as it reinforces the idea that women are sex objects which exist for men’s enjoyment, which can be bought and used solely for men’s sexual gratification. Accepting prostitution sends a clear message that it is acceptable for a man to engage in sexual activity with a woman who does not enjoy it and who could be mentally and emotionally forcing herself in order to be able to cope; the normalization of such one-sided sexual encounters negatively affects the way men relate to women in general and has been shown to increase sexual violence against women. In New Zealand, where prostitution has been decriminalised since 2003, there has been a national decrease in overall crime rates, but an increase in domestic violence and rape[2].

Melissa Farley argues that Nevada’s high rape rate is connected to legal prostitution because Nevada is the only US state which allows legal brothels and it sees the highest rate of rape compared to other American states[3]. “​Nevada’s rape rate is […] way higher than the rape rate in California, New York and New Jersey. Why is this? Legal prostitution creates an atmosphere in this state in which women are not humans equal to [men], are disrespected by men, and which then sets the stage of increased violence against women.​”[4]

While prostitution exists, true gender equality can never be achieved.

Violence Against Women
The sex industry has extremely high rates of violence against women, much higher than society at large. One representative study showed 82% of respondents had been physically assaulted since entering prostitution, 55% of those by buyers. Additionally, 80% had been physically threatened while in prostitution, 83% of those with a weapon. 8% reported physical attacks by pimps and buyers of a nature that resulted in serious injury, for example gunshot wounds and knife wounds. 68% reported having been raped since entering prostitution, 48% more than five times and 46% reporting rapes committed by buyers. Finally, 49% reported pornography was made of them while they were in prostitution and 32% had been upset by an attempt to make them do what buyers had seen in pornography[5].

Women in prostitution are often already victims of violence against women. The prevalence of childhood sexual abuse and chronic traumatisation among prostituted women has been documented by studies showing that between 60% and 90% were sexually assaulted in childhood. 90% of women in one study had been “physically battered in childhood; 74% were sexually abused in their families- with 50% also having been sexually abused by someone outside the family”. “Of 123 survivors of prostitution at the Council for Prostitution Alternatives in Portland – 85% reported a history of incest, 90% a history of physical abuse, and 98% a history of emotional abuse”[6].

Beyond the individual instances of violence or the history of violence suffered by most women in prostitution, prostitution itself is a form of male violence against women. As explained by activist, writer and survivor, Rachel Moran, most people understand the violence inherent to prostitution on a “sensory level”. She asks us to imagine ourselves sitting in any cafe or pub and look around at all of the male customers and imagine that any one of them or every one of them were a sex buyer able, regardless of their age, attractiveness, sexual preferences, personal hygiene or any other attribute, to touch our body and conduct whatever sex acts they desired ‘with’ us. This is the reality of prostitution. The penetration and violation of women’s bodies by men of every kind imaginable, irrespective of the women’s desires. The rebuttal may come that women in prostitution have the ability to choose their customers, but the reality is that the vast majority of prostituted women are not in a position to be so choosy because of the situations of inequality, poverty, coercion, force or other factors contributing to their situation. Just as the cafe or pub you imagined yourself in cannot choose the customers who walk through its doors, nor can a prostituted women choose the buyers who will pay to enact their sexual desires on her.

For a detailed analysis of the risks involved in prostitution, see Melissa Farley’s Risks of Prostitution: When the Person Is the Product.

Race and Class in Prostitution 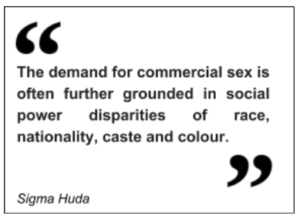 Prostitution must be approached intersectionally. That is, with the recognition that prostitution is compelled by multiple forms of oppressive social power, not just sexism against women. Sigma Huda in her report for the United Nations Commission on Human Rights, said:

“​The act of prostitution by definition joins together two forms of social power (sex and money) in one interaction. In both realms (sexuality and economics) men hold substantial and systematic power over women. In prostitution, these power disparities are merged in an act which both assigns and reaffirms the dominant social status of men over the subordinated social status of women.”[7]

Prostitution is a symptom of women’s comparative lack of economic resources. Globalisation and neoliberalism have exacerbated already unequal economic relations, increasing the global demand for cheap labour and prostitution. Combined with sex discrimination in wages and job type, sexual harassment in the workplace, and an undue burden of caring for children, the elderly and the ill, women are at a significant economic disadvantage in the current economic structure. Poverty is the single greatest “push” factor making women vulnerable to accepting prostitution as a means of subsistence.

In addition, racism shapes women’s entry into prostitution, both because it makes women more vulnerable to prostitution and because buyers demand racialized women in prostitution. “In a world which continues to bear the hallmarks of white supremacy and male dominance, women and girls oppressed on the basis of race, nationality, caste and/or colour are especially vulnerable to sexual exploitation. Prostitute-users often abuse this vulnerability and, in so doing, abuse their own position of relative social power over trafficked persons.”[7] Additionally, racist sexualisation, through pornography in particular, of Black and Asian women as over-sexed and submissive or otherwise available for prostitution contributes to the demand for specifically racialised women. Some buyers “actively seek prostituted women and children of different nationalities, races or ethnic groups for the purpose of exploiting these power disparities”, engaging in a “highly sexualised form of racism”[7].

Indigenous women around the world are particularly targeted for prostitution. In Canada, New Zealand, Mexico, and Taiwan, studies have shown that indigenous women are at the bottom of the race and class hierarchy of prostitution, often subjected to the worst conditions, most violent demands and sold at the lowest price[8]. It is common for indigenous women to be over-represented in prostitution when compared with their total population. This is as a result of the combined forces of colonialism, physical displacement from ancestral lands, destruction of indigenous social and cultural order, misogyny, globalisation/neoliberalism, race discrimination and extremely high levels of violence perpetrated against them[8].

Effects on Prostituted Women
Prostitution is a practice which leads to serious negative long-term effects for the people involved in selling sexual acts, such as trauma, stress, depression, anxiety, self-medication through alcohol and drug use, eating disorders and a greater risk of self-harm and suicide. This is a result of its exploitative nature, which involves (in the vast majority of cases) a woman who performs sexual acts with men to whom she is not attracted, and which also routinely expose the women to psychological, physical and sexual violence. Numerous studies[9] have shown that ​the risk of developing post traumatic stress disorder is higher in prostitution than it is in war. To understand more about the phenomenon of PTSD within prostitution, see this article entitled What goes on in a Trafficking Survivor’s Mind? 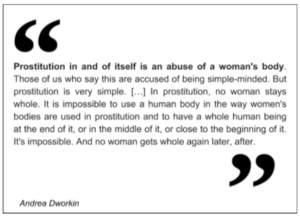 [9] Study by Melissa Farley from 2008 that found that 68% of the women in prostitution experienced PTSD at a similar intensity to combattant veterans or people who survived torture. http://www.trauma-and-prostitution.eu/en/2015/01/26/prostitution-and-trafficking-in-nine-countries-an- update-on-violence-and-posttraumatic-stress-disorder/
Study by Zumbeck in Germany in 2001, who found that 60% suffered from intense PTSD. Zumbeck, Sibylle: ​Die Prävalenz traumatischer Erfahrungen, Posttraumatische Belastungsstörungen und Dissoziation bei Prostituierten​ , Hamburg, 2001.