Join us once again this Thursday 17th June to hear our own Esohe Aghatise in conversation with Rachel Moran, author of Paid For: My Journey through Prostitution, executive director, feminist campaigner, founder of SPACE International and sex trade survivor, and Melissa Farley, psycologist, author, activist, founder of Prostitution Research & Education.

Their conversation will focus on:

There will also be time for audience Q&A

We are so excited to have kicked off our series of online events entitled Debunking ‘Sex Work’: Conversations about Prostitution! Last week saw conversation #1 hosted by our very own Esohe Aghatise, who talked to Gail Dines, PornlandAuthor and Founder and President of Culture Reframed, on the theme of Pornogrpahy and Prostitution. You can watch the recording of the event here.

Check out our event page on Facebook for updates on all of the exciting speakers that will join us from around the world each week.

This series continues every Thursday at 12 noon EDT / 5pm UK / 6pm CET until 1st July, so follow this link to sign up to watch on Zoom (with Italian translation available) or follow the event on Facebook Live!

To Mark the EU Anti-Trafficking Day 2020, Adriana from Radical Girlsss (the youth wing of the European Network of Migrant Women) interviewed Rachel Moran, the survivor activist, author of Paid For: My Journey Through Prostitution and founding member of the survivor group SPACE International.

Human trafficking is, by its very nature, an extremely difficult phenomenon to measure, and the data on the number of identified victims inevitably gives an incomplete picture of the scale of the problem. Between 2017 and 2018, a total of 74,514 victims of trafficking were detected in over 110 countries. The US Department of State reports 105,7876 identified victims worldwide in 2019, showing a clear increase year on year. The estimated total number of victims is much higher, with the ILO putting it at more than 40 million in 2016. Trafficking disproportionately affects women and girls, who – according to UNODC data – represent 72% of detected victims of trafficking globally. Moreover, sexual exploitation is the predominant form of trafficking.

Given the scale of this problem, we have written a statement to mark the day and outline what the data and what our experience have taught us about trafficking for sexual exploitation and how it can be combatted.

The Gloria Steinem Equality Fund to End Sex Trafficking, the Coalition Against Trafficking in Women (CATW), SPACE International and The Sisterhood is Global Institute have written this letter to express the global support for Parliamentary efforts in Germany to adopt the Equality Model. Associazione IROKO has signed the letter and we give our full support to efforts in Germany and around the world to recognise that “prostitution is not work but rather a very harmful and dehumanising system, which fuels the sex trafficking and commercial sexual exploitation of women and girls”.

Liliam Altuntas, survivor of trafficking and prostitution, told IROKO “reading this letter has really made me happy, especially because Germany is a country that’s very close to my heart. Because when I was trafficked, I was sold and brought to Germany. Hearing that there are people who support and make way for this kind of legal change is really important to me. It would represent a real response to the suffering that we have endured, so I’m very happy to join this fight and I’m sure that we will win.”

We encourage our friends and supporters to read and sign the letter.

Click here to watch an interview with Dr. Ingeborg Kraus, conducted by ENoMW‘s Anna Zobnina, in May 2020 just after the publication of a letter signed by various German MPs calling for brothels to remain permanently closed after the coronavirus lockdown.

In 2020 IROKO partnered with Resistenza Femminista to host a series of webinars on the theme of prostitution and the abolitionist model. During the 5 webinars we had the pleasure to host various experts who gave us invaluable insights into the violence of prostitution and the particulars of the various laws that exists around the world. Among these were Dr. Ingeborg Kraus, activist and psychologist specialising in the trauma of prostitution, and Sandra Norak, a survivor activist. Ingeborg and Sandra created this video for us, which explains the failure of the system they have in Germany, where prostitution has been legal and regulated since 2002. 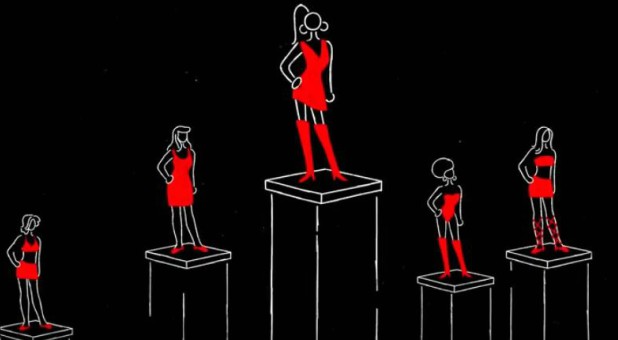 This documentary is a particularly challenging watch, but it’s a necessary one. Try not to fall into the trap of dismissing the phenomenon of trafficking as something that happens ‘somewhere else’, but recognise the clear theme among all women trafficked and prostituted around the world: women and girls don’t choose prostitution. Prostitution chooses them. As Lauran Bethell puts it, “trafficking is the exploitation of vulnerability”, something which is ever-present in prostitution, whether on the streets of Bangkok, in a posh hotel room in Las Vegas, or in a brothel in Amsterdam.

“Even the people who promote prostitution will put out helpful fact sheets on how to avoid getting killed. They don’t say it exactly that way, but they put out a fact sheet that says:

-When you go into a hotel room when you’re servicing a john, drop something on the floor and kick it under the bed, so you can look under the bed to see if there’s a gun or handcuffs there
-Don’t wear a scarf because that can be used to strangle you
-Don’t wear super high heels to an escort out-call because you can’t run fast enough

This is information coming from people that are promoting prostitution as a good job.”

Can you think of any job or profession where these kinds of tactics are necessary to avoid physical violence and even death?

Why does prostitution continue, even thrive, in our modern ‘enlightened’ societies where we claim to protect human rights above all else? Money. It’s as simple as that. By legalising, or even just turning a blind eye, to prostitution, we are not protecting a woman’s right to choose what she does with her body. We are protecting a man’s right to buy a woman. And as long as there are men willing and able to pay money for women and girls, there will be organised crime networks trafficking and selling them.

That leads us to the solution. Block the business model. By criminalising both the pimps and the everyday buyers in prostitution, while offering support and exit services to the prostituted women, the abolitionist model essentially creates a very, very bad business environment for pimps and johns. Traffickers and pimps see Sweden, where this model is implemented, as a bad market. It also has a social implication in the way that people view and value women, creating “an atmosphere of safety, an atmosphere of dignity in the country.”

Sweden has the lowest rate of trafficking in the European Union.

IF YOU WANT TO STOP TRAFFICKING YOU MUST STOP PROSTITUTION 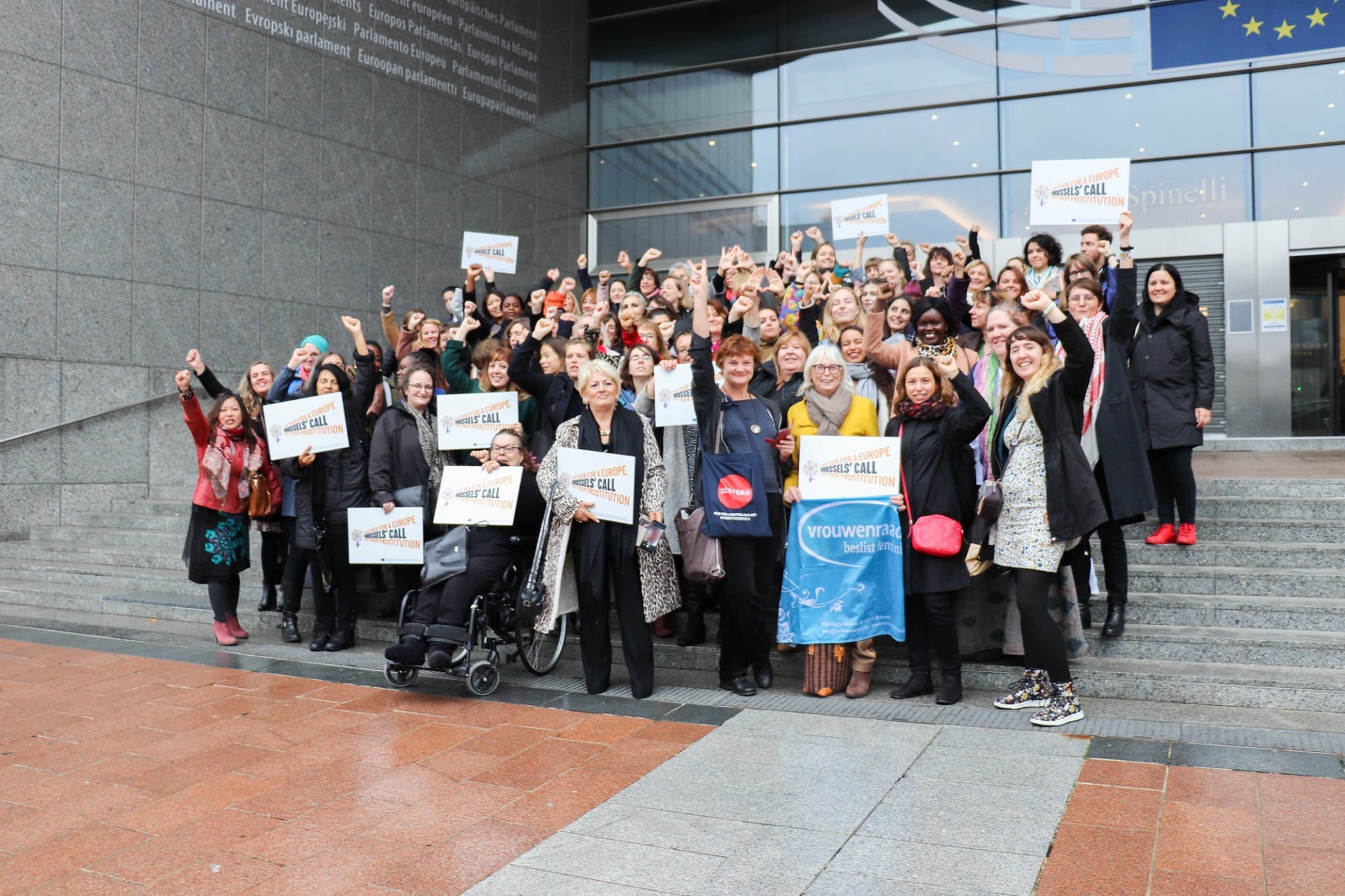 Those of us who work or have worked in the third sector, among victims of violence and their oppressors, will understand the highs and lows that come with the experience. When we come into daily contact with the injustices our society continues to permit – all too often disproportionately against women – the lows are inevitable.That is why we have to embrace the highs! For our colleague, Ruby, the opportunity to attend the Brussels’ Call Conference on 16th October was one such occasion. There is something extremely moving and powerful about being in a room full of feminists and abolitionists, about being surrounded by successful, determined and compassionate women, of all ages and from all walks of life.

The conference, part of the Brussels’ Call campaign for a Europe free from prostitution, was held at the European Parliament (EP) in Brussels to celebrate the fifth anniversary of the EP’s ‘Resolution on sexual exploitation and prostitution and its impact on gender equality’ (also known as the Honeyball resolution), which represented a turning point in the fight against the sex industry and its inherent violence. This resolution was the recognition that prostitution is a form of violence against women and called for measures to end the demand for sexual exploitation. The conference explored the reality of prostitution across Europe and included contributions from some of those most directly affected and those still fighting for change.

END_OF_DOCUMENT_TOKEN_TO_BE_REPLACED

We are happy to hear that some German politicians are recognising the failures of Germany’s prostitution regime and endorsing the Abolitionist Model as an alternative. Below we have translated an article into English, which quotes two members of the German Union parties.

The original can be found here.

In response to discussions within the SPD (Social Democratic Party) parliamentary group about making the purchase of sexual services punishable by law while offering the prostitutes themselves impunity – two pillars of the ‘Nordic model’ of prostitution -, deputy chairman, Thorsten Frei, and the rights and consumer policy spokeswoman, Elisabeth Winkelmeier-Becker, both of the CDU / CSU parliamentary group, said:

Thorsten Frei: “In reality, for many women prostitution means that they are attracted by false pretenses, exploited and abused for years in the most serious ways. That is why we are committed to adopting the ‘Nordic model’ in Germany as well, because within this model the buyers, but not the prostitutes, are liable to prosecution. Numerous European countries – Sweden, Norway, Iceland, France, Ireland and Northern Ireland – are already using this model. We must ensure that there is no room for degrading services such as sexual flat rates. We want to effectively continue the fight against forced prostitution and trafficking that was started by the previous legislature, without criminalizing the prostitutes themselves. For this, we will approach our coalition partner, from whose ranks this proposal has been made, and hope that they support this project. “

Elisabeth Winkelmeier-Becker: “Self-determined prostitution is the exception in practice. In many cases, prostitutes are sexually exploited in unimaginable ways. We should also be concerned as a society when the image many men have of women is characterised by sex. A paradigm shift is therefore necessary. Germany must not be the brothel of Europe.”

In 2014, in the framework of its campaign ‘Together for a Europe free from prostitution’, and at the eve of the vote of the EP resolution on gender equality and prostitution (Honeyball resolution), the European Women’s Lobby (EWL) developed a leaflet responding to the most frequent assumptions on prostitution. 18 myths are therefore looked at from a gender equality and women’s rights perspective. From “It is the oldest profession in the world” to “We must combat trafficking, but prostitution has nothing to do with it”, EWL’s leaflet wants to provide human rights evidence-based answers to the reality of prostitution and trafficking in women in Europe and in the world.

The leaflet also comprises a comparison of the Swedish and Dutch policies, after ten years of implementation, based on official reports and studies. The last page summarises the demands of the Brussels’ Call, which has been signed by more than 200 organisations from all over Europe and beyond, including IROKO. In 2014, 54 MEPs had already signed it, from different countries and political groups.