Esohe Aghatise, PhD, Founder and Executive Director
Selected Honours and awards:
2013/2014: Awarded recognition by the European Institute for Gender Equality (EIGE) as one of the Women and Men Inspiring Europe for Gender Equality, 2014.
2008: Awarded “Service to the Nation Prize” by the Nigerian Government through the National Agency for the Prohibition of Trafficking in Persons (NAPTIP).
2007: Honoured by the US Secretary of State, State Department, U.S.A as “Hero Acting To End Modern-Day Slavery”
2005: Awarded “Madre Teresa di Calcutta” Prize in the Sector on Women in the Third Millennium of the International Literary and Artistic Prizes “Elio Vittoriani” of COBGE and of the Municipality of Messina in collaboration with the University of Messina, Sicily, Italy

Esohe founded Iroko in 1998 and has grown the organisation from a one-woman operation into an internationally recognised NGO. She is a UN Expert on Trafficking in Persons and in migrant female workers and highly experienced lawyer and senior management executive, having worked in a wide range of positions and capacities: anti trafficking lecturer and trainer, negotiator of international contracts, conflicts and cultural mediator and certified ethno-clinical therapist.

Esohe is on the Board of Directors of the Coalition Against Trafficking in Women (CATW), and in April 2019, she was also voted onto CAP International‘s board. 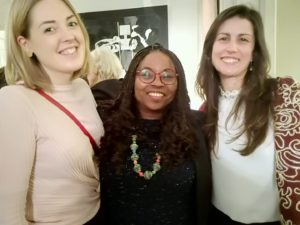 Nica Mammí – Turin, Italy
Having graduated in History at University Federico II, Naples, with a Master’s degree as a Cultural Operator for the Euro-Mediterranean area, she is a freelance journalist and teacher of Italian as a foreign language. As a result, her years of work experience have always included a focus on foreigners in Italy, social integration and women, which led to her becoming a member of the YWCA Italy Board, alongside fellow board member Esohe. She joined Iroko in 2016 as Communications and PR Manager.

Ruby Till – Turin, Italy
With years of experience of volunteering and working in the third sector, with young people and education, Ruby joined Iroko in early 2018 to support the organisation with English-language project-planning and communication. In 2013 she studied Comparative Law, Economics and Finance at the IUC in Turin.

Ijose Aghatise, Cultural and Linguistic Mediator
Ijose started working with Iroko in 2003 as the administrative coordinator and a cultural and linguistic mediator. Over the years she has managed Iroko’s housing project and has gained invaluable experience in the field of mediation, which has allowed her to become an expert and trainer on working with migrants and victims of trafficking.

Anna Studzinska – Turin, Italy
A graduate in Psychology from the Jagiellonian University of Krakow (Poland), Anna began working with IROKO in October 2018 as a volunteer helping to teach Italian to beneficiaries and to carry out daily tasks. Since February 2021 she has been working with IROKO providing Administrative Support.

If you’d like to work with us, find out about any current vacancies on our Get Involved page.

Glory Kome Okorigwe – Benin City, Nigeria
Glory graduated from the Delta State Polytechnic in Ozoro. She went on to work in an ultrasound centre for two years and is currently a school teacher. She started volunteering with Iroko in April 2020.

IROKO has worked with a number of other skilled, passionate volunteers over the years, and we are always looking for people keen to make a difference.

If you’d like to volunteer with us, find out more about our volunteer positions on our Get Involved page.

Davide Lo Bue
Davide is an environmental educator and outdoor excursion guide who, between 2008 and 2016, was a founding member of the Parco del Nobile Association and coordinated their training activities. He has managed the education activities of the Agriforest Cooperative for 17 years, he is an advisor on responsible tourism for WWF Italy in Piedmont and the Aosta Valley, and teaches courses in schools and for environmental educators. A lover of beekeeping, he has been an advisor to the Aspromiele Association since 2006 and is a coordinator of the national bee-education project. In his free time he manages educational beehives and facilitates beekeeping courses throughout Turin. He is keenly involved in the protection of biodiversity, organic beekeeping, food education, and the creation of school allotments and gardens.

To find out more about Davide’s collaboration with IROKO and all of our current projects, click here.

Kaleidos@Torino
Kaleidos run a CAF and offer various services to support both Italians and migrants, for example with searches for housing, as well as organising events to promote respect for cultural diversity and traditions. In 2019 Iroko began to collaborate with Kaleidos to offer our beneficiaries financial and administrative advice and services, such as preparing tax returns or applying for social benefits.